The History of the Spring Known as Blue Spring

Each day, 38 million gallons of water pours from the center of Blue Spring into its trout-filled lagoon. The lagoon overflows into the White River, replenishing the area with some of the purest water in the region according to a recent study.

A source of energy and power, the water became a magnet for activity that fed the spirit, healed physical and emotional wounds, and helped build a community.

It is noted that American Indian tribes put their differences aside when they entered the spring area as it was considered sacred ground. 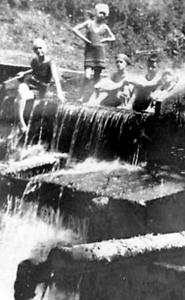