In 2003, the former Eureka Springs Gardens was transformed into the Blue Spring Heritage Center, focusing on the rich history and culture of the area. This year we will feature several workshops and conferences along with an ongoing Heritage Art Series. Visit our programs page for more detailed information.

Check back for information on wildflower plantings along the bluff area, herb walks, the Three Sisters Garden, the Medicine Wheel Garden, programming, classes and the new orchard to name a few.

Thirty eight million gallons of water a day flow from Blue Spring everyday, but where does it come from? Thanks to a team of divers from Aquatic Cave Exploration, we may soon find out.

Thirty-eight million gallons of pure, 54-degree water flow from Blue Spring every day, but where does it come from? Thanks to a team of daring divers from Aquatic Cave Xploration, we may soon find out.

Divers began exploring the mouth of the cave - a fissure only 3 feet wide and an estimated 500 feet deep - last summer. So far, more than a dozen dives have been made and the explorers have reached a depth of 96 feet. 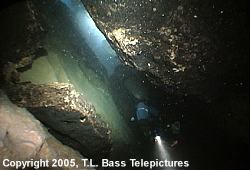 A cave system and a small room were discovered after negotiating past a restriction at a depth of 50 feet. At first, the cave system appeared to be made of rock, but it is actually composed of densely-packed white clay. Another restriction at the 96-foot level is being carefully enlarged to allow passage to even more mysterious depths.

Many interesting artifacts have been found: a large railroad tool embedded in the rock at a depth of 50 feet; the remains of an old freight wagon hub; part of a frying pan; a broken gear section; pieces of wagon tackle. 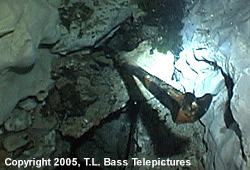 In addition, several species of crayfish have been found (some of which may be troglodytes, or cave living) and trout have been seen deep in the cave system. Aquatic plant life deep within the system may indicate a secondary surface inlet to the spring.

A documentary film of the exploration, as well as the Blue Spring Heritage site and the springs of Eureka Springs, is planned by A.C.X. and T.L. Bass Telepictures, which produced an award-winning documentary on the Buffalo National River, is being planned for national distribution.